Student Loans And Bankruptcy In Illinois 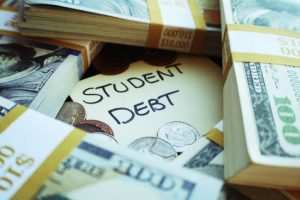 Rising tuition costs and a competitive economy have produced a student loan crisis in America. Roughly 44 million people owe about $1.5 trillion in education debt. This debt load forces many recent graduates to put off certain purchases and also work at jobs they may not particularly like.

Until about 1975, education debt was completely dischargeable in a Chapter 7 bankruptcy. After all, these loans are unsecured debts, just like credit cards and medical bills. But when Congress revised the Bankruptcy Code, lawmakers inserted a provision limiting student loan discharge. Many believed, rightly or wrongly, that student radicals borrowed their way through school in the late 1960s and early 1970s. These lawmakers did not want these individuals to declare bankruptcy and avoid paying these debts.

The aforementioned provision limited discharge to cases involving “undue hardship.” Lawmakers intentionally did not define this phrase and the courts did not tackle the problem for several years. Finally, in 1987, the Second Circuit in New York decided Brunner v. New York State Higher Education Services Corp.

Reading between the lines, the court clearly set out to punish Marie Brunner. The case’s factual recitation points out that Ms. Bruner owed about $4,000 in student loans, which was hardly an eye-popping amount of money. The court was also displeased that Ms. Brunner had apparently made no payments despite the fact that she was working. And, rather than ask for a temporary deferral or some other relief, she immediately filed bankruptcy.

The court approved the so-called Brunner Rule. It became the nationwide standard for student loan discharge in bankruptcy cases. Under this rule, the court only grants relief if:

By around 2010, with the student loan crisis deepening, many circuits abandoned the harsh Brunner Rule in favor of a more lenient totality-of-the-circumstances analysis. But in 2015’s Tetzlaff v. Educational Credit Management Corporation, the Seventh Circuit stayed with Brunner. This Circuit encompasses Illinois, Indiana, and Iowa. Unless the Supreme Court overturns Brunner, which does not appear likely, student loan debtors face uphill climbs in Illinois bankruptcy cases.

Obtaining a Brunner Discharge in Illinois

But an uphill climb is not an impossible climb. In fact, many surveys indicate that most of the people who ask for a student loan discharge obtain at least partial relief, even under the harsh Brunner Rule.

Most contested discharges are resolved not at trial but during pretrial negotiations. To avoid a trial on this issue, the trustee (person who oversees the bankruptcy for the judge) may agree to a partial student loan discharge. No one wants to be “the bad guy” in cases like these, and that includes Illinois bankruptcy trustees.

Alternatively, the judge may refer the dispute between the bank and the debtor to mediation. In this forum, the bank has the duty to negotiate in good faith. In other words, the bank must be willing to make some compromises in order to work out a mutually agreeable deal.