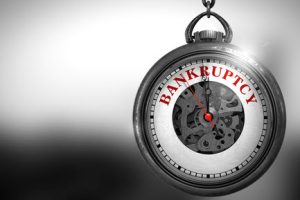 When regular people contemplate bankruptcy, does it look anything like the looming HHGregg bankruptcy?

After two straight years of revenue losses, including a 24 percent decline in the fourth quarter of 2016, the Indianapolis-based company may now see Chapter 11 bankruptcy as the best way to pull out of its financial tailspin. Two other large appliance retailers — Wet Seal and Limited Stores — have already filed bankruptcy this year. As e-commerce platforms seem to continually expand, traditional brick-and-mortar sales outlets are having a harder and harder time competing with online retailers. Chief Executive Officer Robert Riesbeck declined to comment directly on the bankruptcy rumors, other than to say that HHGregg’s leadership is “focused on continuing to execute our business strategy, as planned, and returning this company to profitability.”

In February 2017, the New York Stock Exchange warned HHGregg that its stock could be delisted because it has lost three-fourths of its value in the last several months.

Many large companies have substantial cash reserves to help them get through a few bad months, but most families have no such luxury. In fact, according to the Federal Reserve, almost half of Americans do not have the cash to make a $400 emergency payment. So, they are highly vulnerable to unexpected situations like:

Any of these scenarios can hit almost any family at almost any time, and they are mostly beyond the family’s control. Many people even experience a one-two punch, like a divorce followed by a serious illness.

A good financial rule of thumb is that if you have more than $10,000 in unsecured debt, like credit cards and medical bills, it is often difficult or impossible to pay off this indebtedness in a reasonable amount of time. Similarly, if you are more than one month behind on secured debts, such as house and car payments, it is not easy to catch up.

Chapter 7 bankruptcy eliminates most unsecured debts, so debtors have no legal obligation to repay them. Chapter 13 bankruptcy gives debtors up to five years to catch up on secured debts, and during this time, moneylenders cannot take any action against debtors without specific permission from the bankruptcy judge.

Both Chapter 13 and Chapter 7 debtors must complete a debt counselling course. Typically, this course is available online,only takes a few minutes to complete, and only costs a few dollars. Furthermore, all debtors have a duty to cooperate with the trustee (person who oversees the bankruptcy on behalf of the judge). Trustees normally request many financial documents, such as tax returns, insurance declaration pages, and mortgage notes. So, it is a good idea to locate these documents before filing to avoid last-minute paper chases.

Chapter 7 debtors must also complete the means test. To be eligible for Chapter 7, the debtor’s income must be lower that the average income for that size household in that geographic area. For example, an Indiana family of four must earn less than $76,600 a year. The actual amount changes frequently.

It’s always a good idea to heed the warning signs of bankruptcy. For a free consultation with an experienced bankruptcy lawyer in Chicago, contact the Bentz Holguin Law Firm, LLC. We routinely handle cases in both Illinois and Indiana.